Specialists for hernia surgery in Neuendettelsau

Dr Amann and Dr Gontarczyk are absolute hernia specialists. Whether inguinal hernia, femoral hernia, incisional or umbilical hernia - particularly in the field of minimally invasive surgery, they have made a name for themselves reaching far beyond the local Ansbach area. 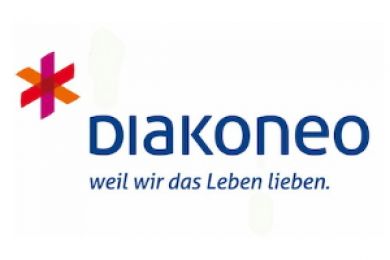 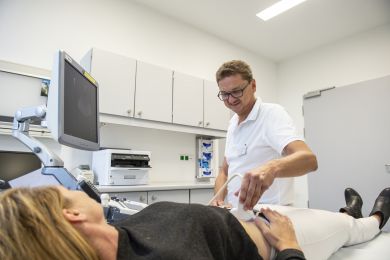 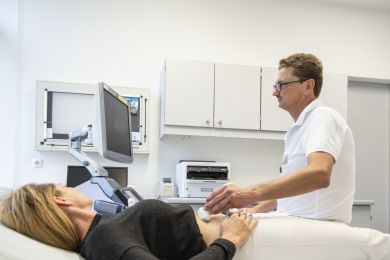 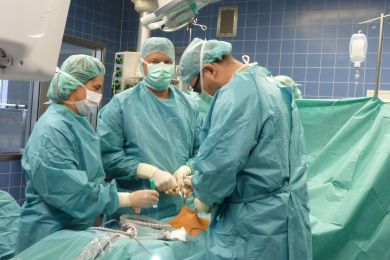 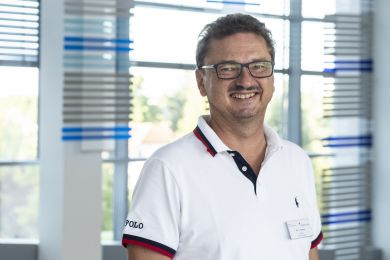 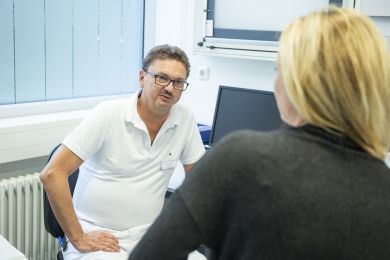 When it came to appointing the proven hernia specialist Dr Stefan Amann as Medical Director of the Neuendettelsau Clinic on the suggestion of his chief physician colleagues, representing the interests of the physicians was also a decisive factor. This step therefore provides an insight into the position Dr Amann enjoys in the institution in the district of Ansbach: On the one hand, it shows the trust that the hospital places in the head of general and visceral surgery - and on the other, it demonstrates the professional and human esteem in which he is held by his colleagues, with whom he is in daily interdisciplinary exchange. No wonder that his patients also trust him completely in every phase of treatment - along with his motivated team.

From the moment Dr Stefan Amann took over the position of head physician in the Department of General and Visceral Surgery, he was considered an absolutely ideal candidate - by the hospital management, the entire team and his predecessor Dr Hans Winkler. He had already established minimally invasive surgery at the clinic in Neuendettelsau in Middle Franconia. And Dr Amann was able to devote himself with all his passion to the medical field for which he is now known far beyond the region around Ansbach and Nuremberg: hernia surgery.
Even before his appointment as head physician, he - together with his colleague and current senior physician, Dr Gontarczyk - had begun to build up the competence centre for hernia surgery, which today enjoys such a great reputation.

Since August 2016, Dr G. Gontarczyk has strengthened Dr Amann's team in Neuendettelsau, where he acquired the additional title of visceral surgery in 11/20.

Many highly specialised physicians who set standards in their disciplines today began to focus on their speciality at an early stage. That was also the case with Dr Amann and Dr Gontarczyk: It was visceral hernias - in all their complexity that became the focus of their interest very early on. The certification of the German Hernia Society (DHG) stands for the fact that they are among the absolute experts in their field. This specialist society ensures the quality of treatment of patients with abdominal wall hernias and other hernias, for example, through standardised further training - in accordance with the strictest criteria and with great success: The hernia centre led by Dr Amann is the only hospital in West Middle Franconia to be certified by the DHG, with Dr Amann and Dr Gontarczyk as recognised surgeons in the centre of excellence.

The German Society for General and Visceral Surgery (DGAV), which is primarily committed to more quality and transparency in all surgical matters, also recognised the centre as a centre of excellence for hernia surgery. To achieve this certification, Dr Amann and Dr Gontarczyk had to provide evidence of more than five hundred hernias operated on personally - which was of course no problem for the experienced specialists. As a centre of excellence for hernia surgery, the Department of General and Visceral Surgery at the Neuendettelsau Clinic also participates in the "Herniamed Quality Assurance Study", in which all abdominal wall hernias operated on, including their long-term course, are recorded with the consent of the patients concerned. In this way, the high quality parameters that Dr Amann and his team deliver are verifiable in every detail.

Verifiable quality of surgery - that is entirely in the spirit of Dr Stefan Amann. This was one of the reasons why he focused on inguinal and abdominal wall hernias, on incisional and umbilical hernias and on femoral hernias in particular. Surgical precision is a decisive factor for the prognosis, especially when operating on complex hernias. In fact, studies also show that the surgeon's expertise is the basis for successful treatment - and the more complex the procedure, the more this is true.

Dr Stefan Amann and his team are familiar with particularly innovative procedures of minimally invasive, endoscopic and laparoscopic surgery - in other words, all forms of modern keyhole surgery. For minimally invasive inguinal hernia surgery, he often uses the TAPP technique, a gentle and extremely safe procedure with very low complication rates and almost no problems with chronic groin pain. And if a minimally invasive operation is not possible, for example because of adhesions in the abdominal cavity, Dr Amann and his highly competent team perform the operation using open surgery. In the case of an inguinal hernia, for example, the Lichtenstein repair technique is used, whereby a delicate plastic mesh is inserted.

Other open techniques that Dr Amann and Dr Gontarczyk are also experts in are the sublay technique and the onlay technique, in which scar hernias are treated with a mesh implantation below or above the abdominal wall muscles, depending on their position. In these procedures he always has the support of a top-class team, without which the medical successes would not be conceivable.

The successes with which the Hernia Centre in the rather tranquil Neuendettelsau attracted attention did not go unnoticed. It was not only because of the certifications that all of Franconia looked to the clinic in the community in the district of Ansbach, which in its more than one hundred and fifty-year history has repeatedly surprised the people in the region with medical and nursing innovations and today is one of the most modern hospitals in the surrounding area. This also applies to the comfort offered by the new ward block with its bright, friendly atmosphere as a modern hospital building. Medical Director and Head Physician Dr Amann also plays a major role in the close and intensive cooperation with specialists at the Nuremberg Hospital and the Erlangen University Hospital - also as far as personnel requirements are concerned.

As Medical Director of the Neuendettelsau Clinic, Dr Amann is, incidentally, jointly responsible for ensuring that legal requirements and obligations and hospital hygiene are complied with, that the medical service runs properly - and that the necessary further training is duly attended. He also attaches great importance to this for himself: because Dr Stefan Amann wants to stay on the international cutting edge in all aspects of hernia surgery. Naturally, as head physician of the Department of General and Visceral Surgery, he is also familiar with other diseases of the abdominal cavity - for example, endocrinological and proctological operations or minimally invasive operations in tumour surgery, where he can also point to many successes in fast-track surgery, for example. But his main focus remains clear: Dr Stefan Amann has dedicated himself to hernia surgery.