The term hernia is used in medicine to mean an intestinal rupture. This is a congenital or acquired gap in the layers of the abdominal wall, through which the intestine protrudes. Here, rupture means a type of tear in the layers of the abdominal wall. A distinction is made between internal and external hernias. A condition for the appearance of a hernia is a weak spot in the wall of the abdominal cavity, which is either congenital or which appears over the course of life, due to surgery, injury or a connective tissue weaknesses, for example. 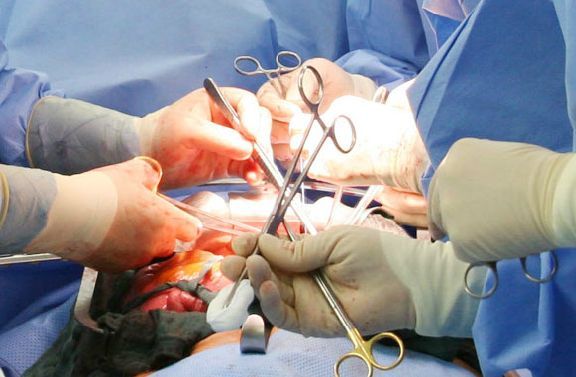 If the hernia is externally identified or the protrusion, which appears with a rupture, leads from inside the body toward the skin, this is referred to as an external hernia. If the hernia is located inside the body (e.g. between the chest cavity and the abdominal cavity), this is called an internal hernia. The most frequent external ruptures are inguinal, umbilical, incisional or abdominal wall and femoral hernias and the most frequent internal rupture is the diaphragmatic hernia. Since soft tissue ruptures do not recede, but become larger over time, hernias should be treated by means of hernia surgery, provided the overall condition of the patient allows surgery.

Types of hernia, an overview

Since the most frequent hernias are inguinal, femoral, umbilical, incisional and diaphragmatic hernias, these will be described in the following.

At 80 percent, inguinal hernia is the most frequent form of hernia. Men are affected nine times more often than women. In 20 percent of cases, the inguinal hernia appears on both sides. The rupture is located above the inguinal ligament. Generally, a painless bulge in the groin appears initially. Pain often appears only due to physical exertion or due to prolonged sitting. As a rule, the bulge disappears again when lying down. Since, depending on the size of the rupture, incarceration of the intestine with a possible subsequent necrosis of sections of the intestine may result, hernia surgery is vital.

Femoral hernias appear predominantly in older women. Here, there is a rupture below the inguinal ligament, so that the bulge can generally be seen on the inside of the thigh. Unlike inguinal hernias, femoral hernias, as a rule, are painful from the outset, and because incarceration of sections of the intestine can also occur, a femoral hernia is also treated by means of hernia surgery.

If a diaphragmatic hernia is present, organs can slide from the abdominal cavity into the chest cavity through the gap in the diaphragm and become incarcerated. Strictly speaking, a diaphragmatic hernia is not a rupture, but an enlargement of the area where the esophagus reaches the stomach through the diaphragm. The enlargement of this normally occurring gap can appear due to a weakness in the connective tissue or a more prolonged increase in the pressure in the abdominal cavity (e.g. pregnancy, being overweight). This can lead to pain, particularly after eating or when lying down, because gastric juices then flow back into the esophagus. A hernia of this type also requires hernia surgery.

Depending on where the rupture is located and how large it is, it may be asymptomatic or may develop into a life-threatening inflammation. Initially, then, the type of rupture present and how extensive this is must be determined exactly. For this purpose, a thorough physical examination is made prior to possible hernia surgery. Other methods for assessing the condition precisely are ultrasound and possibly computed tomography. Sometimes x-rays images are taken, with or without contrast medium, such as the examination known as a barium swallow x-ray examination for a diaphragmatic hernia.

In addition, a consultation with the attending surgeon takes place prior to the hernia surgery, in which the patient is informed about the planned surgery and the most frequent complications of the surgery, and the postoperative progress is explained to him. Likewise, a presurgery discussion with the attending anesthetist about the type of anesthetic technique planned (general anesthesia or local anesthesia) should be conducted prior to the hernia surgery.

Since an inguinal hernia will not recede by itself, it should be treated surgically. There is the particular risk, just as in all intestinal hernias, that parts of the intestines may become incarcerated and necrotize. The surgical method selected depends on the age of the patient and the location and size of the rupture. In principle, there are three different methods of hernia surgery for an inguinal hernia: the Shouldice technique, the Lichtenstein technique and minimal invasive techniques by means of laparoscopy.

In surgery using the Shouldice technique, the surgeon makes a skin incision in the inguinal region and exposes the rupture. He opens the hernial sac, presses the contents of the sac back into the abdominal cavity and sutures the gap to the adjacent connective tissue. The Lichtenstein technique is similar in principle, although the rupture is stabilized on suturing using a synthetic mesh which is sutured in. In the minimal invasive technique, an endoscope (a tube with a miniature camera) and the required instruments are introduced via small abdominal incisions and advanced up to the inguinal hernia. Here, the intestine is also returned to its proper position and the rupture is stabilized by means of a synthetic mesh.

There are also essentially two methods of hernia surgery for femoral hernia: the open technique and the laparoscopic technique. In open femoral hernia surgery, the hernial gap is closed, after the hernial sac has been relocated or removed, using sutures. Here, however, tension frequently appears, which can cause pain and which may result in a recurrence. Laparoscopic (minimal invasive) femoral hernia surgery is performed using smaller incisions. The surgical instruments and an optical system with a video camera are introduced into the abdominal cavity via these small incisions and the rupture is exposed at its origin.

A non-resorbable (non-dissolving) mesh made from polypropylene is stretched over the hernial orifice and attached to the abdominal wall from the inside. The peritoneum is closed over this again. The scar tissue grows into the lattice structure of the mesh and allows a new layer to be formed, which is generally under less tension than if the abdominal tissue structures had been sutured together directly. In all femoral hernia surgical techniques which are performed with the insertion of a mesh, it should be borne in mind that the size of the synthetic mesh is selected so that the mesh noticeably overlaps the healthy and stable tissue and can be firmly incorporated. In an emergency situation with acute incarceration, open femoral hernia surgery with an inguinal incision or the minimal invasive technique is selected. 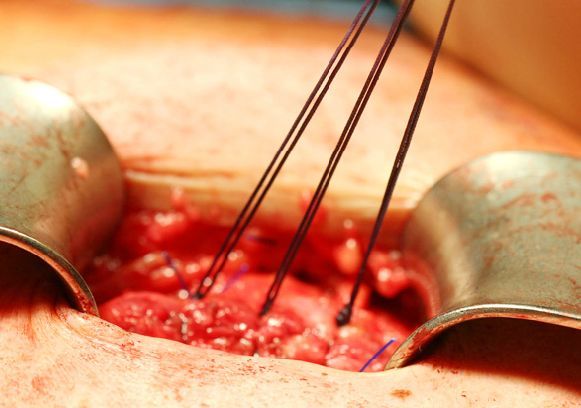 For a large incisional hernia, a pneumoperitoneum is sometimes induced prior to the hernia surgery. This means that the abdominal cavity is prestretched over a period of several weeks by being filled with air every 2 – 3 days. By this means, the contents of the hernial sac (e.g. intestine) can be more easily moved into their original position again and the pressure of the contents of the abdomen on the abdominal wall after the hernia surgery is reduced.

In incisional hernia surgery, the muscle layers spread out are sutured together again. On closing the rupture by means of direct suturing, small incisional hernias up to a diameter of approximately two centimeters are treated by direct suturing with a non-soluble suture for patients without risk factors for a recurrence (recurrent rupture). For larger gaps where there are risk factors for a recurrence or repeated hernia surgery, a synthetic mesh is placed over, in or under the open site and connected to a muscle layer. Different techniques are distinguished in hernia surgery (sublay, inlay, onlay technique), depending on the layer of the abdominal wall in which the mesh is introduced.

There are several surgical techniques for diaphragmatic hernia, whereby so-called fundoplication is the technique most frequently employed. Here, a cuff is formed from portions of the stomach, which is positioned around the lower part of the esophagus. This produces a reduction in the backflow of the acidic gastric contents into the esophagus (reflux). The chyme (food pulp), however, can continue to be conveyed into the stomach by the esophagus. This surgery, as a rule, is performed as abdominal endoscopy (laparoscopy). For over 90 percent of the affected persons, fundoplication results in a permanent cure. In particular, using this method, young people with reflux disease are spared having to take medication long-term.

Another technique in hernia surgery for a diaphragmatic hernia is gastropexy, also called fundopexy. Here, the stomach is moved into its normal position in the course of the hernia surgery and sutured to the anterior abdominal wall so that it is no longer able to shift. In the third technique in hernia surgery for diaphragmatic hernia, hiatoplasty (also called hiatal narrowing), the gap in the diaphragm is simply sutured more tightly. The edges of the gap in the diaphragm are then rejoined using special sutures. If required, another synthetic mesh is attached to these sutures, which is intended to reduce the risk of a renewed rupture.

Together with the general complications applicable to all surgery such as hemorrhage, infection, thromboses and the risk of an embolism, swelling at the surgical site, caused by the bruising or edema in the tissues, are relatively frequent for hernia surgery. As a rule, however, these disappear again shortly after the hernia surgery. Mild pain or sensory disorders may also appear in the area of the surgery after the hernia surgery, but also disappear again, as a rule.