Here you will find medical specialists in the field Sunken chest surgery. All listed physicians are specialists in their field and have been carefully selected for you according to the strict Leading Medicine guidelines. The experts are looking forward to your inquiry.
see full article

Pectus excavatum presents as a condition in which abnormal breastbone growth makes it appear as if a person has a sunken chest. With more severe cases of pectus excavatum, the whole centre of the chest has a caved-in or scooped-out appearance, which leaves a deep dent in the body shape.

Though pectus excavatum can generally be observed shortly after birth, the severity of a sunken breastbone commonly worsens during the growth spurts that normally occur in adolescence.

Another name for pectus excavatum is funnel chest, and the condition is much more common in males than in females. Pectus excavatum is reported to occur in an (estimated) 1 in 150–1000 births, with males outnumbering females by a ratio of 3:1. In some of the most severe cases, fully developed pectus excavatum may interfere with internal heart and lung functioning. However, even milder forms of pectus excavatum have the potential to cause children to feel extremely self-conscious. Surgical procedures can be used to correct any resultant deformity.

For the majority of those who experience pectus excavatum, the only sign of the condition is a slight chest indentation. In some cases, this indentation increases in depth during early adolescence, and may continue to worsen into adult life.

Compression of the heart and lungs, caused by breastbone pressure, can occur in more severe cases of pectus excavatum. Some common symptoms may include:

The precise cause of pectus excavatum is not yet known, though many experts believe it can (at least sometimes) be inherited. Reports suggest around 37% of those with pectus excavatum have a close family member who also has the condition.

A simple physical examination is usually sufficient to diagnose pectus excavatum. However, your doctor may wish to conduct some further tests in order to check for any heart or lung problems that can be associated with this condition. Such tests could include: 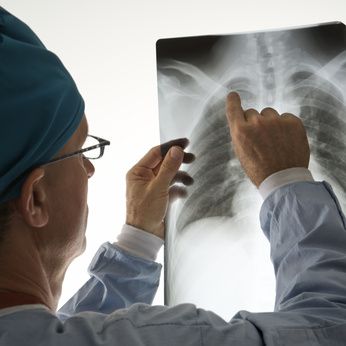 Though pectus excavatum can be repaired via surgical intervention, this treatment is usually only available for those who experience moderate to severe symptoms of the condition. Those whose symptoms are considerably milder may find that physical therapy can do much to help. For example, some specific exercises can help to develop a better posture and promote a greater degree of chest expansion.

Where there is evidence of moderate to severe pectus excavatum, there may be a surgical solution. Here, the two most common surgical procedures can be classified according to the kind of incision employed to correct the condition:

A central incision reveals the breastbone so the malformed cartilage connecting the ribs and lower breastbone can be easily removed. Using surgical struts or mesh supports, the breastbone is then repositioned and secured. These extra supports can then be taken away after six months to a year.

To perform a minimally invasive surgical procedure, small incisions are made under the arm area on both sides of the chest. Surgical tools and a tiny fibre-optic camera are then used to place a rounded metal bar beneath the breastbone. This bar helps the breastbone to assume a more natural position, and remains in place for two years before being removed.

Regardless of which method is used, most of those who undergo corrective surgery are happy with the resultant change in their appearance. To ensure the best outcomes are achieved, a surgical intervention would usually be performed during the time when adolescent growth spurts are most likely to occur. Nevertheless, some adults have also been able to benefit from this surgical remedy.

Chances of recovery from pectus excavatum

Physical therapy and appropriate surgical intervention can usually do much to rectify this condition, especially where children and young adults are concerned.

Most adolescents prefer to look just like their contemporaries, and so may sometimes need counselling to cope with their condition. Connecting with others facing similar problems, via pectus excavatum forums and organisations, can also provide valuable support.