Here you will find medical experts who specialize in the treatment of incisional hernias. All doctors listed here meet our strict admission criteria!

An incisional hernia is a type of hernia that develops because of a previously made abdominal wall incision – in other words, the site of the scar remaining from an earlier surgical operation. Such incision will have been made to gain access to internal organs, or perhaps to facilitate a caesarean section. Thus, an incisional hernia does not have much in common with a recurrent hernia.

The previous incision will have been closed by stitching, but sometimes the stitches do not hold, proper healing does not take place, or the wound comes apart as time passes. Incisional hernias can take a few months or even years to appear.

A Danish study published in 2014 found that around two out of every 1,000 women required surgery for a post-caesarean hernia that appeared within 10 years of their original operation.

The clinical symptoms of an incisional hernia are a noticeable bulge or protrusion, at or very close to the location of an earlier surgical incision. Almost any kind of prior abdominal operation can later result in the development of an incisional hernia in the vicinity of the scar – for example, where infection has prevented proper healing. Even so, incisional hernias tend to be more frequent when the incision performed during any initial operation is vertically aligned, with a midline down the centre of the abdomen, or very close to that region. Experience suggests that surgical closure of these wounds can often be a complex procedure.

In the case of incisional hernias following a caesarean section, there can often be considerable pain and discomfort – especially if the bulge is fairly prominent. There may be stomach upsets, nausea and perhaps vomiting. If the intestines have been displaced, there may also be constipation or other difficulties with bowel movements. 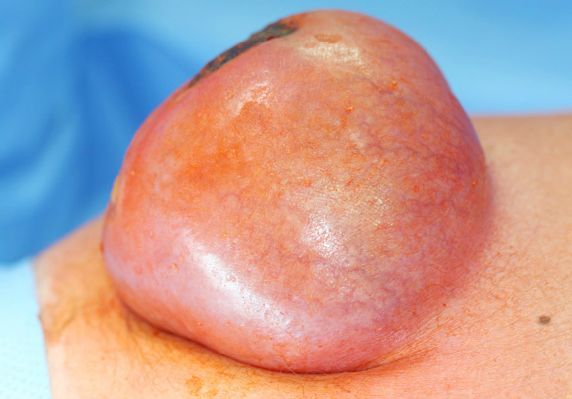 An incisional hernia is usually caused by some particular weakness that develops within the surgical wound. This can be the result of a haematoma (a solid swelling of clotted blood and tissue), a seroma (a swelling caused by an accumulation of fluid) or an infection, all of which can prevent the normal process of wound healing.

Further causes can include:

In many instances, a doctor can diagnose an incisional hernia just by observing its visual appearance and then conducting a physical examination. However, some similar conditions can develop (especially following a caesarean section), which present similar symptoms to an incisional hernia, such as:

In a few cases, your doctor may decide to use internal imaging techniques such as ultrasound or a CT (computerised tomography) scan to make a diagnosis, to rule out other conditions, or to check whether your hernia contains any bowel tissue.

Though wearing an abdominal binder may alleviate some of your symptoms, surgical intervention remains the usual treatment to repair an incisional hernia. For women experiencing problems after a caesarean section, doctors won’t normally recommend further surgery, unless:

Surgical options are either traditional open or keyhole (laparoscopic) repairs, and which method is chosen usually depends upon the size and condition of the hernia, the needs of the patient and the advice of the surgeon performing the operation.

In either option, it is likely the new incision will be supported by a type of mesh covering the weak areas, rather than by stitching, which does not work so well for this kind of procedure.

Chances of recovery from incisional hernia

Surgical repair of an incisional hernia generally has a successful outcome, with less than 20% of those undergoing the procedure having any further trouble.

Where a female patient may be planning another pregnancy, the risk of recurrence can be greater. Therefore, in such circumstances, doctors sometimes suggest delaying any surgical repairs until childbearing is over.

Prevention of an incisional hernia is largely a matter of following your doctor or surgeon’s advice after an operation, and the professional application of high standards of surgical practice during all procedures.