With approximately 1 million new cases per year, breast cancer is the most common cancer among women worldwide. About 1% of breast cancer cases occur in men. In Germany alone, up to 70,000 women suffer this fate every year.

Learn more about the chances of recovery and therapy methods for breast cancer.

What is breast cancer and how does it develop?

Breast cancer is a malignant tumor of the breast. The female breast gland (mamma) consists of glandular tissue, fat and connective tissue. The glandular tissue is composed of lobules. They produce breast milk and flow into the mammary ducts. Depending on where it originated, breast cancer is subdivided into forms that originate from the mammary ducts (invasive-ductal) or from the glandular lobules (invasive-lobular). There are also some rare special forms. Breast tumors are also classified according to the degree of malignancy, hormone sensitivity and sensitivity to certain antibodies.

The exact cause of breast cancer unfortunately remains unknown. However, a number of risk factors have been identified:

The earlier view that certain hormone replacement therapies increase the risk of breast cancer has now been rejected as incorrect. An outdated American study initially claimed that hormone therapies can cause breast cancer. The background to this assumption was that hormone medications were massively overdosed and, above all, of inferior quality. The medical specialists' opinion distances itself from this misinformation, especially as patients can be frightened without reason.

How is breast cancer diagnosed?

All changes to the breast must be examined, including lumps, contractions, pain, skin blemishes or discharge from the mammilla. Such symptoms are usually noticed by the patient herself. Unfortunately, breast cancer does not always cause symptoms, so that some breast carcinomas are only noticed in mammography, ultrasound or MR tomography (MRT).

It is important to detect breast cancer as early as possible, since the chances of recovery become worse if the tumors are larger or if lymph nodes are already affected. Therefore, it is important for every woman to participate in screening measures such as monthly self-examination, preventive medical check-ups at the gynecologist and mammography. Health insurance companies even offer mammography screening between the ages of 50 and 69! 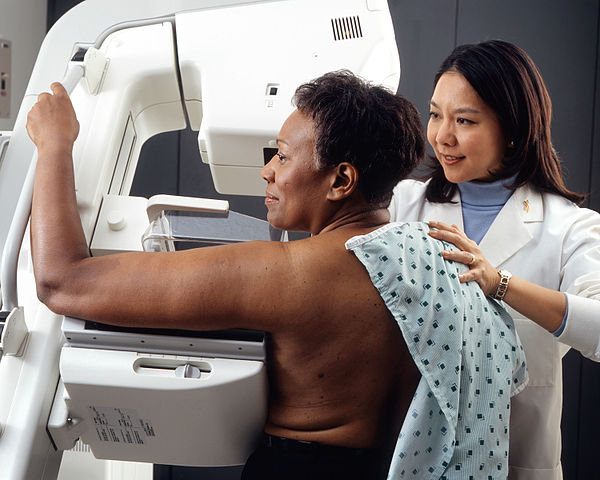 What happens in a breast consultation?

In most gynecological clinics and their interdisciplinary breast centers, consultation hours are held during which each patient is examined and advised by specialists. As a rule, gynecologists or radiologists refer patients with breast findings to these consultation hours. In addition to a detailed discussion of the personal history, a palpation as well as an ultrasound examination of the breast with a high-resolution ultrasound device take place. The mammography images you bring with you will be examined again or another special mammography or MR tomography will be arranged.

Frequently, the removal of tissue cylinders under local anesthesia with a so-called high-speed punch biopsy is performed during the ultrasound examination.

If the patient's diagnosis of breast cancer is confirmed, the next steps to be taken will be discussed in a personal discussion, as described below. If the risk is increased, this also includes a series of examinations to rule out the possibility that the breast cancer has spread to other organs.

The goal of surgical therapy is the complete removal of the tumor from the breast. Today, the majority of patients no longer require the removal of the entire breast, but the cancer can be operated on while preserving the breast. Here, the tumor is removed from healthy tissue with a safety margin.

Unfortunately, this is not always possible. In the case of skin infestation or inflammatory components, the removal of the entire breast must be considered. This procedure is called mastectomy or amputation of the breast.

Today, so-called oncoplastic techniques are used in all surgical procedures, which means that cancer surgery techniques are combined with the principles of plastic surgery. This often allows beautiful cosmetic results to be achieved even after extensive breast surgery. Techniques are also used in which the opposite side is adjusted, for example in tumor-adapted reduction plasty.

Of course, the removal of a breast is not a fate to be resigned to. Reconstruction can be carried out both with the patient's own tissue and with a prosthesis, and the nipple can also be reconstructed.

Which form of reconstruction is suitable for which patient depends not only on the physical conditions and the planned treatment, but above all on the patient's wishes, so that these questions are discussed individually with each patient and a tailor-made concept is developed for each patient.

Breast cancer is a curable disease as long as no other organs are affected. However, chemotherapy is often necessary to achieve this cure. This involves the intravenous administration of drugs that prevent tumor cells from dividing and growing. Of course, these drugs also have an effect on the rest of the body, which is why the therapy also has side effects, e.g. hair loss, nausea, loss of white blood cells. However, many side effects can now be prevented so well that they hardly occur at all. The therapy is usually carried out on an outpatient basis in breast centers, by oncologists or specialized gynecologists.

A small valve is usually inserted beforehand, through which the therapy can be administered, a so-called port. This prevents the veins from being damaged during chemotherapy and the treatments are less unpleasant. If it is already apparent after the punch biopsy that chemotherapy is necessary due to the tumor biology or the spread of the tumor, it is generally recommended to carry out chemotherapy before the surgery; this is called neoadjuvant chemotherapy. This reduces the size of the tumor and makes it easier to operate on breast cancer. It is at least as important, however, that during chemotherapy before the surgery, regular checks are carried out to see how the tumor is getting smaller, thus providing proof that the therapy is effective.

Many tumors are sensitive to hormones, they have so-called hormone receptors. The pathologists determine whether this is the case by conducting a histological examination. Hormone-sensitive breast carcinomas can additionally be treated with antihormones. In premenopausal women, tamoxifen is used in most cases, sometimes combined with drugs that cause artificial menopause. Post-menopausal women are also often treated with tamoxifen, but this should be done in a set combination with another drug, an aromatase inhibitor. Many patients are also only treated with aromatase inhibitors.

Pathologists are investigating not only the hormone sensitivity of tumors, but also specific targets for an antibody, the HER2-neu receptor. If the tumor is sensitive to the antibodies in question, chemotherapy is accompanied by antibody therapy. These are also outpatient infusions.

If the breast is not removed during breast cancer surgery, the residual breast must be treated with radiotherapy to reduce the risk of recurrence. This is rarely necessary after the removal of the breast. Certain lymph drainage sites must be irradiated if many lymph nodes are affected. Radiotherapy is performed on an outpatient basis and usually lasts up to six weeks on weekdays. Radiation begins after the end of chemotherapy.

Side effects are mainly local skin and tissue reactions; some patients describe a more or less severe limitation of fitness.

Follow-up care is carried out by gynecologists in private practice who adhere to fixed schedules. The follow-up consists of a palpation examination of the breasts, ultrasound of the breast and mammography and a physical examination and questions about complaints. Further instrument examinations and tumor marker determinations may also be part of the aftercare.

Throughout Germany, quality controlled breast centres have been certified by the German Cancer Societies and the German Society for Senology.

The first certified breast centre in Germany is that of the University Women's Hospital in Tübingen under the direction of Prof. Dr. Diethelm Wallwiener. All therapy decisions are made together at the regular tumor conferences. These "breast centres" have to undergo certification by specialist committees in order to make the quality they offer transparent and verifiable.

For further comprehensive information on breast cancer, please visit the Women's Health Guide of the Breast Center of the UFK Tübingen.

Specialist information on breast cancer can also be obtained from the German Society for Senology and the German Cancer Society.